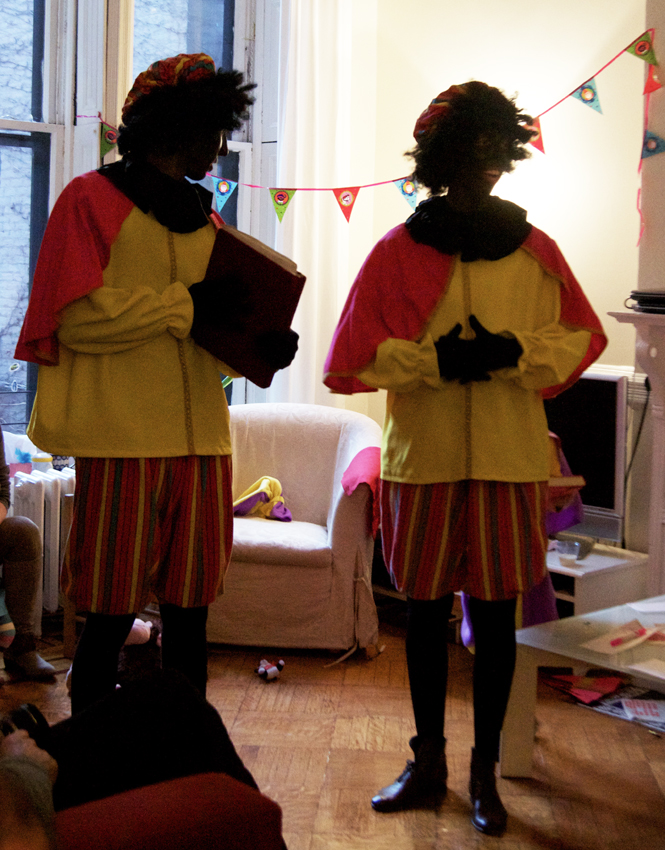 Back from our Sinterklaas weekend at my sister-in-law in the Netherlands, I could not help but notice some of the small habits of this celebration that continue to amuse and surprise me even after 10 years. When I said that to my better Dutch half, he got a bit annoyed and told me that I should write about it in the blog; so I took up his word and here it is ;-)

The day of SinterKlaas’ arrival is the first big event of the celebration, and the families are happy to come to the local harbour to welcome Sinterklaas arriving on his boat, with his horse. He is greeted by the mayor and all the local authorities of importance and everybody organize for him a parade through the city.

Sinter Klaas does not travel alone, he is accompanied by the Zwartepieten (pronounced zvartepit) who are his helpers. They are all called Piet (Peter) and are all Zwart (black). These companions of Saint Nicolas became the object of a controversy because some people considered it to be a racist practice, (the looks of the ZwartePiet coincide much with how black people were portraid in colonial times). This controversy became a passionate topic at the national level a few years ago: every politician had to take a stand (for or against the zwartepiet) and the controversy negatively impacts the yearly celebrations with the two camps fighting one another. It is is likely that the zwartepieten in their current form will slowly be replaced by more colorful Pieten. Because besides being black and helping Saint Nicolas to distribute the gifts, Zwartepiet, is mainly a character who has fun all the time, does a lot of nonsense and loves jokes. He is maybe as important as the Sint in the celebrations.

So, from mid-November on, for 3 weeks it’s pure craziness in the Netherlands.

During these three weeks you can find one or several Zwartepieten on every street corner. He litterally throws to all the passerby “pepernoten" which are small round cinnamon biscuits. This is one of the most important and somewhat staggering traditions found throughout the Saint Nicholas ritual: the biscuits that are mixed with dust, biscuits on which we walk, biscuits on the ground that the dogs can lick, and biscuits that are then picked up by the children to enjoy. That does not shock anyone, I've never seen an adult tell a child not to eat it because it's not very clean, on the contrary, parents pick the pepernoten up from the floor, remove the biggest dirt from it and then offer them to their offspring.

During these three weeks, children have the opportunity to put their shoes in front of the fireplace and sing some SinterKlaas songs. The songs of Saint Nicholas are innumerable and parents as well as children love to sing together for the Sint. Together with their shoe, the children can also lay next to it a carrot and an apple (to the benefit of the horse of Saint Nicolas) and with the hope of finding small toys and sweets (pepernoten) in the morning. You can imagine the excitement of the children throughout this period, always wondering if Saint Nicholas is going to pay them a visit at night. If you are a parent, give up the idea of any sleep during this whole period!
After wandering around the country for 3 weeks, finally comes December 5th (Here I am not sure exactly if it’s the day to wish farewell to Saint Nicolas (until next year) or to celebrate his birthday, or a bit of both). That day, every family welcomes SinterKlaaas in their home with songs and showers of pepernoten. SinterKlaas is then directed to his big armchair where he opens his big book. In the book, a page is dedicated to each child of the family. One after the other the children are invited to approach SinterKlaas and to discover what is written: how was this year, how did he or she behave, what did he accomplished and what will he have to improve in the following year. SinterKlaas did not come empty handed and he offers each child a small present. It is said that if the children were misbehaving during the past year, they will not have any present and Saint Nicholas will take them with him back to Spain…. (I have never seen that happen though!) - If you do not have a Saint Nicholas present, it is also possible to have someone knock on your door for him, throw in a handful of pepernoten and leave bags of gifts on the doorstep). 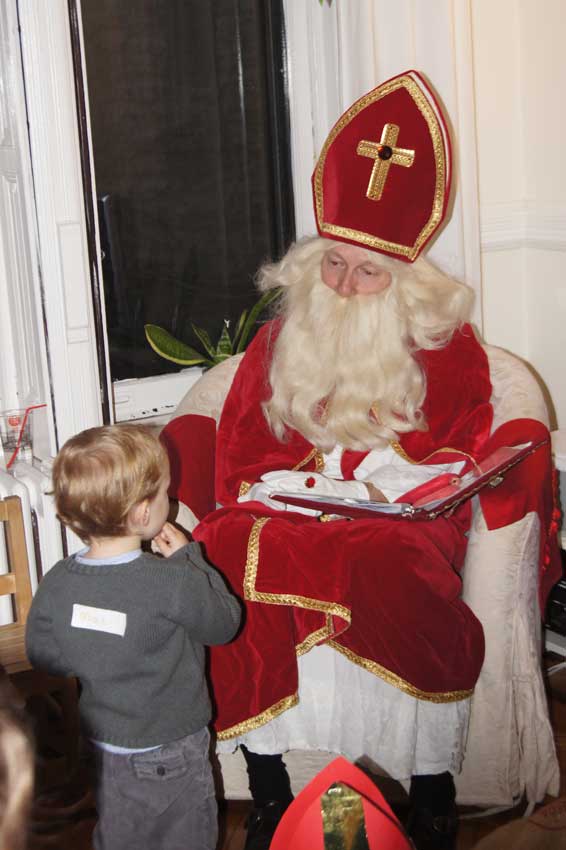